This time of year you see lots of posts about Halloween cocktails that are fine if you don’t have to drink them. They’re all about the kitschy look and not about tasting nice. So we thought we would suggest some alternatives, cocktails that have spooky names but are delicious. So if you’re having a Halloween party (or are recovering from trick-or-treaters), try one of these. Much more delightful than something meant to look creepy, but not very appealing to drink.

Also, since it’s the witching season, we thought we’d introduce our “familiars” after our regularly scheduled program 🙂 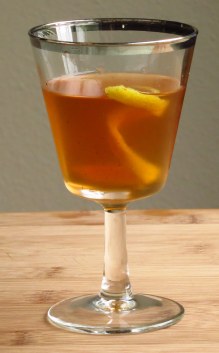 Stir with ice and strain. Serve with a lemon twist.

Named for the visionary of horror, H.P. Lovecraft. He was a New Englander by birth (like Christa), and thought it was the best place in the world. So we wanted something that would speak to the flavors of New England at Halloween.  Autumn apples came immediately to mind, so we started with Calvados. The warmth of spice goes well with apples – who doesn’t think of apple pie, this time of year –  so we thought falernum or allspice dram would be a nice accompaniment. We decided on the allspice dram with it’s lovely allspice and clove flavors, and gave that a whirl. It was a good start, but we felt it needed a bit more spice so we went to the bitters cabinet and ferreted out the Bittermens ‘Elemakule Tiki bitters, which added a nice cinnamon note to round out the spices. Then we added just a touch of simple syrup to sweeten it up a little bit and help round out the mouth feel. Finally we brightened it up a bit with a lemon twist, which also added an appropriate tentacle-y aspect. 😀

How does it taste? Like apple pie. Very apple-y, with lots of spice and a nice hint of lemon. 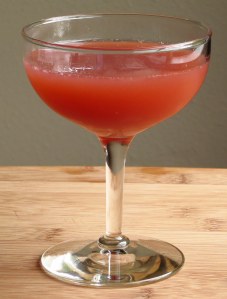 Shake with ice, strain, and serve.

Originally we came up with this cocktail to highlight a spiced rum called the Lash. Hence, rum, sodomy (and the lash).  A salute to the traditions of the British Navy! Unfortunately, we found that The Lash was a little too sweet for our tastes. However we quite like The Kraken spiced rum for its liberal spice and moderate sweetness. So the drink was shortened to just be Rum & Sodomy. And who doesn’t like rum & sodomy 🙂 Christa feels it has a nice creamsicle taste to it, or maybe baby aspirin, but in a good way. Shaun thinks it has a nice, sweet, spice-y/citrus-y start, which then moves into the nutty creaminess of the orgeat followed by a nice tart astringent finish from the cranberry. It’s important to note that our cranberry syrup is homemade and unsweetened. So if you’re using store bought, try to get some that’s unsweetened. Otherwise this drink will be a lot sweeter than we intended. Though if you like really sweet drinks …

This is a delicious rye and scotch cocktail by Shaun Layton at L’Abattoir up in Vancouver. Christa is a little obsessed with it. She originally had one at Tavern Law (properly attributed, of course) and was immediately smitten. The bittersweet richness of the amaro and Maraschino bringing out the darker notes in the rye, tied together with smoky scotch. Yum! Tavern Law did it with a scotch float rather than mixing it in, something we quite like and continue with when we make one. We went with Willett’s 5 yr for the rye and Ardbeg for the scotch. The drink brings out a savory, almost meatiness in the rye and pulls out not just the smoke but also the peat of the scotch. Very delicious. Makes you want a plate of barbecue to go with. Try it with some of your favorites, as the choice of base spirits in this one can make a big difference in the final flavor.

And now, since it is Halloween and all, let us introduce the black kitties of our households who supervise our cocktail-making.

This is Novio, Shaun’s familiar, named because he is such a lover (Novio means boyfriend in Spanish).

And this is Ursula, Christa’s familiar, named because she looked like a little bear cub as a kitten.

Hoping you enjoy these drinks, and that they make your holiday a little more festive.