It was recently brought to our attention that February 22nd is National Margarita day, in the form of a sample bottle of Casa Noble tequila 🙂 (see our samples policy to understand that it made the cut). Now the Margarita is one of those wonderful 3-ish ingredient drinks, salt being the ever important fourth ingredient. 😉 So in making a classic one, there’s not a whole lot to do except to say that a properly made one is delicious. Being the Booze Nerds that we are, we wanted to go a little farther afield with Margarita flavors and ingredients. So we decided to deconstruct it as well as play around with the idea of the base ingredients to see what we could come up with.

Shaun thought about making a deconstructed version using the flavors of the base ingredients, so replacing the lime juice with lime bitters, and replacing the triple sec with vermouth and an orange twist. From a purely theoretical standpoint it seemed like it might be quite lovely. But of course until you actually make one and taste it you never know! Turns out it works quite nicely, making a Margarita Martini as it were. However, much like the Martini, choose the quality of your base spirit carefully as this is essentially a big glass of booze. 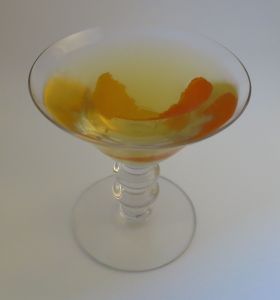 Stir all ingredients with ice. Strain into a glass. Garnish with an orange twist.

This turned out surprising well in our opinions. A margarita for martini drinkers. We made two versions of this drink, one with Partida Reposado and one with the Casa Noble Reposado. Both were quite nice, with the Partida having the zingy pepper notes and the Casa Noble featuring more agave notes.

Next up, Christa wanted to see if we could stay close to Margarita flavors while mixing up the citrus a bit, keeping the orange and lime but adding lemon as well. The Cointreau was replaced by orange juice, and lemon put in an appearance with limoncello and lemon bitters. Not a Margarita by strict standards, but in the same ballpark. A Margarita pod person, as it were 😉

Shake with ice. Strain into a glass.

Whether you like your margaritas traditional or like mixing things up or yes, we hope that you pull out some tequila and make a margarita or three as your patriotic duty for National Margarita day. Tequila is one of those spirits that is too frequently abused and rarely appreciated, but used properly it makes an excellent base spirit in all sorts of cocktails.

1 Response to Playing with Margaritas