We recently received some tasty new bitters from The Bitter Housewife out of PDX (see our Samples Policy to understand what it means that we’re talking about them). We’re also lucky to have Scrappy’s bitters here in Seattle. We’re big fans of our local producers. 🙂

These two happen to have very different styles; Scrappy’s tends to make strong, dry, concentrated bitters that focus on one or maybe a few flavor components, while Bitter Housewife makes mildly sweet though still quite bitter concoctions that are less concentrated and use more supporting flavors to round out the central flavor. We thought it would be interesting to see how their bitters of the same types compare, both straight and in a cocktail.

First up, we tasted each of the flavors side by side to see how the compared directly.

But of course, we’re all about mixing. We decided to make something with the grapefruit bitters, since the aromatics are so different that it wouldn’t be as clear a comparison and we felt the cardamom bitters were the least different of the lot. For our cocktail, we went with the San Pedro from Scrappy’s site, which is their official cocktail for the grapefruit bitters. It looked like a yummy, tequila-based riff on a Martini, so yes please.

Stir all ingredients with ice. Strain into a glass. Garnish with a lime twist. 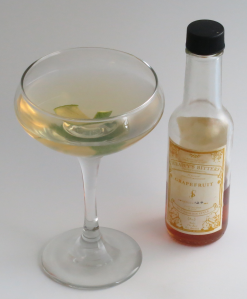 As you can see, your choice of bitters can influence the flavor of your cocktail quite a bit. Because we are dorks, we often like to have the same type of bitters (grapefruit, orange, aromatic, etc.) from several different makers on hand so we can use their different flavor profiles to best advantage. We recommend tasting any bitters you get straight, to help you get an idea of the style that maker prefers, and also to see how they compare to the same type of bitters that you’ve had from other makers. Building up this base of knowledge will help you reach for the right bottle based on the drink and your mood next time you assemble a cocktail.