This week we investigate the effect of temperature and oxidation on cocktails. We had noticed that some cocktails seem to change in flavor, often for the better, after sitting a short while (on those rare occasions where we don’t just gulp them down ;)). We were curious as to whether this was due to the drink warming up, oxidizing, or both. So we went back to our notes to find a couple of drinks where we had noted this phenomenon, and started our experiment. Read on to see what we found.

We wanted to try both a drink with citrus and one without, to see if that made any difference. We thought we would start with the spirit-forward cocktail as being less tiring on the palate. We had notes that the darker, richer flavors of a Robert Burns stood out with a bit of sit time, so we mixed up a couple of those.

We both liked the third variation best. It still had some brightness, but the darker flavors had time to develop and the warmth had brought out a nice heavy texture. Yum!

Next, we wanted to try something using citrus, and we thought of the Black Lily (which if you haven’t tried one, you really should. They’re kind of brilliant). 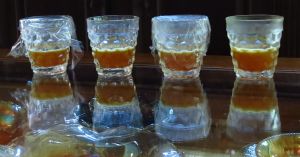 The cold/covered version of the Black Lily was our favorite. The acid and bright citrus balanced the other strong flavors of the drink, but everything was well-balanced and had a chance to speak.

The inclusion of citrus seems to make both warmth and oxidation less influential. There was more acidity and a lighter mouth feel for the cold drinks, less acidity and a smoother/heavier mouth feel for the warm ones. The warm drinks expressed darker flavors like chocolate or coffee better, whereas as brighter flavors like citrus show up more in the colder drinks. Oxidation in both cases seemed to have a negligible or slightly negative effect, whereas warmth seemed good for spirit-forward drinks and not bad but not better for drinks that used citrus.

We came into this post wondering if the differences we had noted previously was simply us imagining things or if there was actually something real going one. What we found with this experiment was that there were very definite differences between drinks that had aged a bit covered vs. aging uncovered vs. keeping them cold or letting them warm up. We’re not exactly sure what the mechanism is, but there are some very definite differences in all 4 cases. As always we recommend that you noodle around with the timing of serving your drinks to see if you have a preference or not.